When Will Inflation Begin to Kill off Fiat Currencies?

We are 20 years into the 21st century.  Over these past 20 years, prices across the globe are up around 80%.  That means that euros or dollars are worth 80% less today than they were at the end of 1999.  Perhaps surprisingly, the 80% is generally low compared to what some observers expected would happen with prices over this period.

The 80% start to the 21st century comes on the heels of what some would call the “Inflation Century”.  In the annals of human history, inflation was usually not something worth of discussion.  No English king gave much credence to inflation concerns (generally).  Leaders of most every other country in world history have similar lack of interest.  That changed in the 20th century.

In the 20th century, the world began a massive experiment in inflation inducing.  It is difficult to estimate, but the prices in the 20th century around the world probably expanded by at least 1,300%.  Yes, that is 1,300% over 100 years.  That gain is why some observers are wondering why prices have not grown faster to start the 21st century.  Across the globe, prices are generally increasing, but not at the rate some would expect.

This constrained view of prices (something most citizens of the world would invite) leads to the postulation here -  Will inflation finally start to kill off fiat currencies in 2020?  And, will Bitcoin be a large beneficiary?

The charged question lends itself to one’s speculations of the future. Experts, no doubt, would likely dismiss the question.  Governments control their currencies, and with few exceptions, governments are on solid footing with their currencies and inflation.  This point of view may win out in 2020, but it is not without risks.  Could 2020 be the year the “inflation risk” comes back to life?

Before speculating, here is a look at the inflation picture at the end of 2019.

The inflation picture follows.  The first is the year-over-year change in prices from 2002 to 2019.  The highlighted gray circle testifies to the recent slowdown.

The second figure is the cumulative change in prices.  Interestingly, prices over this period rose the fastest in Australia, up on average 44%. 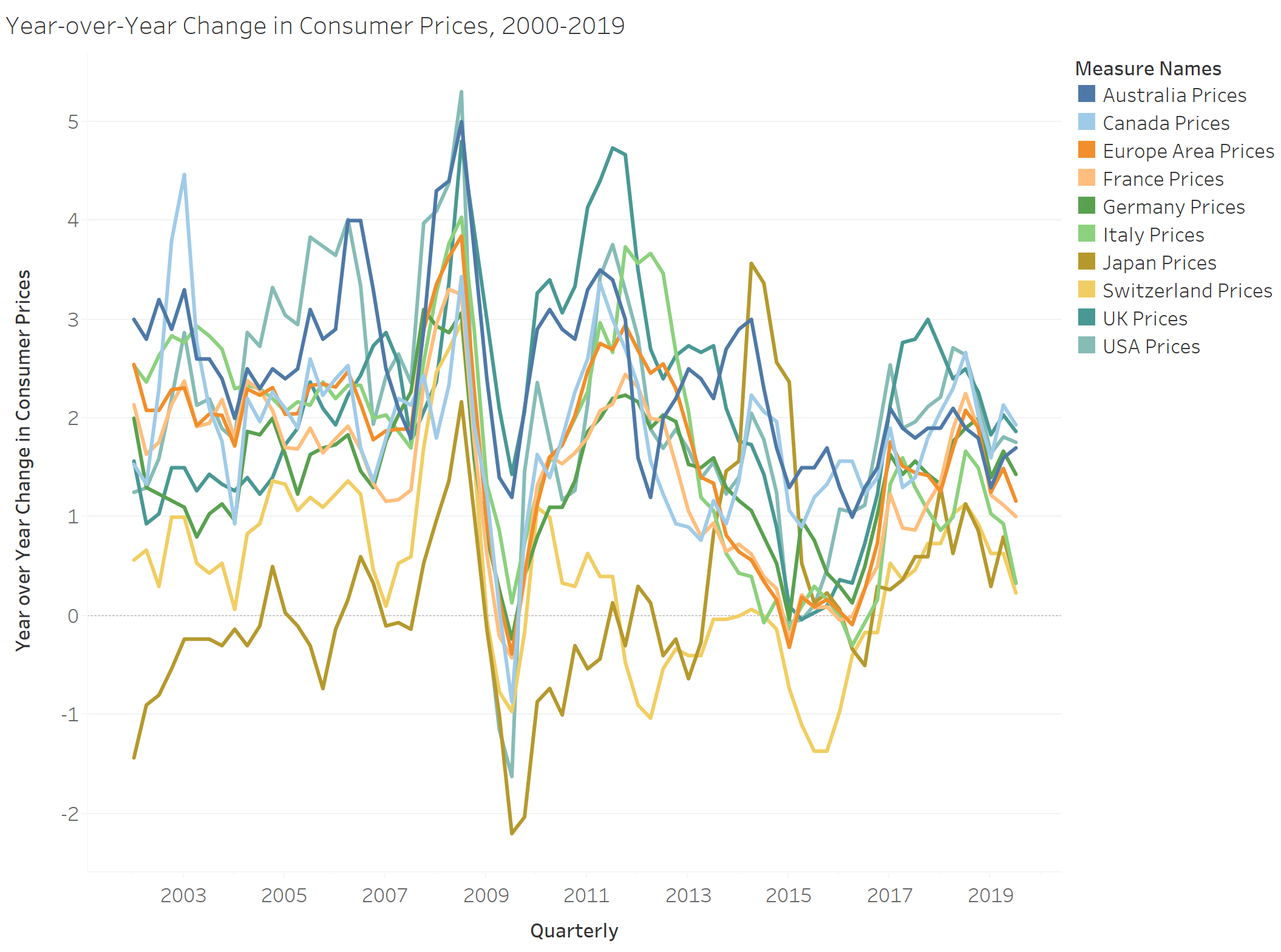 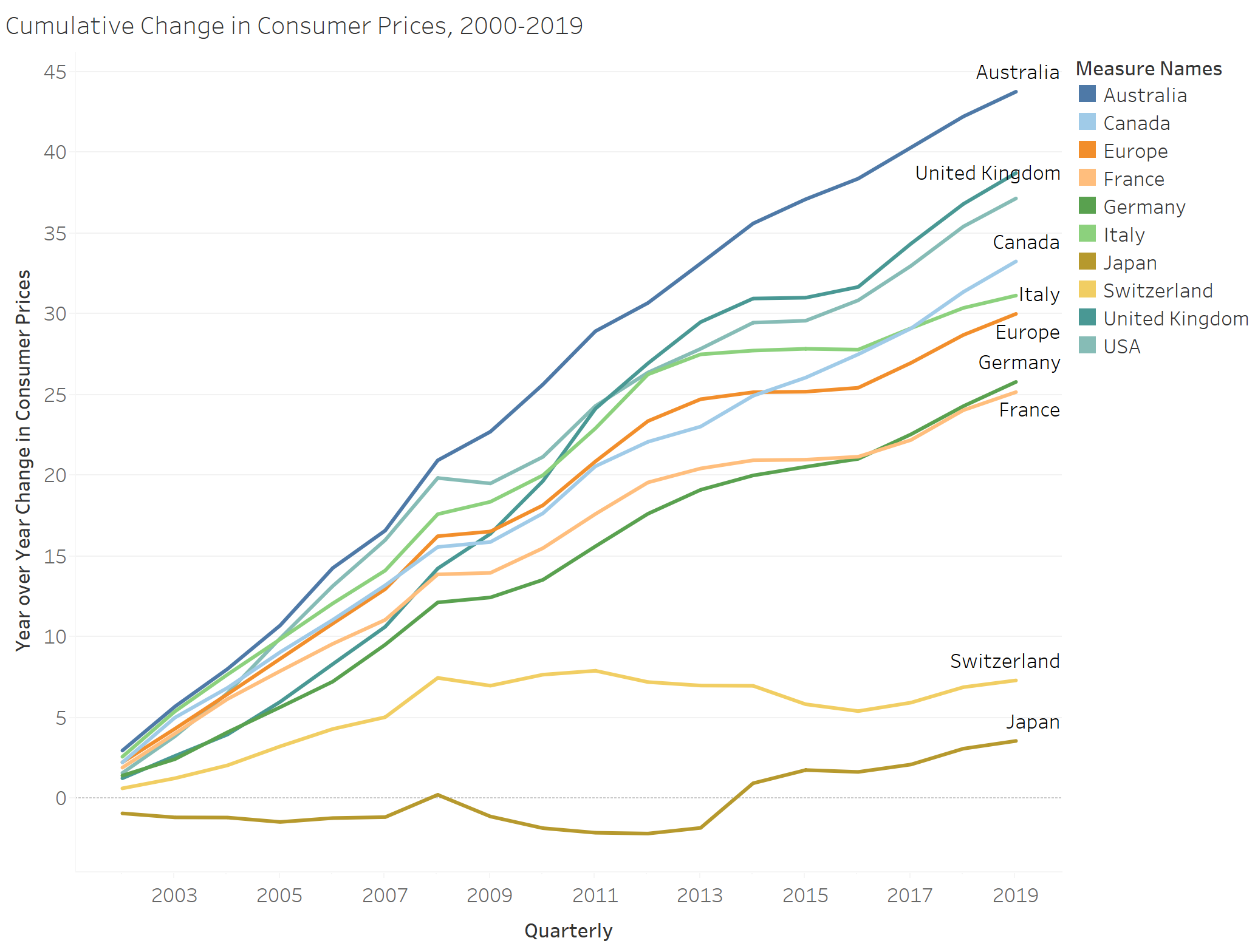 Potential Triggers for Higher Inflation in 2020

With 2019 ending, now is a perfect time to think about where prices are heading into 2020 and what could possibly trigger higher inflation in the coming year.  Three potential triggers for higher inflation in 2020 are the following.  First, central banks will be back to printing money in the coming year.  This “out-of-thin-air” money has no backbone, which presents the risk of more money chasing the same amount of goods - and thereby leading to higher inflation.  The second possibility is that historically low interest rates, especially short-term rates, go even lower!  Central banks cannot help but “help the poor, wobbly economy”.  The third trigger could be expanded government spending.   For example, the European Central Bank’s new president, Christine Lagarde, has been urging European leaders to spend more money.  Apparently, the global economy needs more European government spending since it has not had enough of it to date.  Whether one agrees with these three items is up for debate, but one thing cannot be debated from these three.  It is that money printing, low interest rates, and more government spending will put upward pressure on prices in 2020.

Prices across the globe are up approximately 80% through the first 20 years of the 21st century.  Although not too destructive, it is still higher than any other century in human history.  At the end of 2019 prices were “disinflating”, which has led some observers to discount any potential risk from inflation in 2020.  This “calm before the storm” approach to inflation has the risk of downplaying a potential inflation storm on the horizon.  The world may well be on the event horizon of higher inflation in 2020.  Observers should hang on to their seats.