Something Big is on the Horizon for Gold

Money runs the world, at least that is what appears to motivate a majority of the world’s population.  What comes to mind when thinking about money?  Some people certainly think of the noticeable – the pound, the yuan, the dollar, the euro, and so forth.

Others likely think of expensive things, like multi-million-dollar homes, yachts, and caviar.  Thrown in with people’s view of money is perhaps the most obvious – gold.  Gold has been the world’s most popular precious metal for at least 2,500 years.

Before thinking about any big moves in the gold market in the upcoming years, a brief history seems appropriate.  Gold’s first known use as a currency goes all the way back to 643 BC in Lydia (modern day Turkey).  By 560 BC, the Lydians figure out how to separate gold from silver, and by so doing created the world’s first gold coin.  The “invention” led to Croesus being the first king to use gold as coin, which lead to the modern-day phrase “rich as Croesus.”

Around 500 years later, the Romans issued their first gold coin, known as the aureus.

Fast forward another 100 years to 1,066, when the British currency system established the silver pound.

Just 200 years later out of Venice came the gold ducat.

Moving to the 18th century, the U.S. officially began a silver-gold monetary system in 1792.

About 100 years later, in 1900, the Americans formally put themselves on the gold standard.

Not many years later, in 1913, with the onset of World War I, European countries officially suspending the gold standard for their currencies.

About 25 years later, the global Depression came to an end and countries began returning to the gold standard.
In 1944, the gold standard was cemented with the Bretton Woods agreement, which had countries agree to gold as the measure of value across all countries’ currencies (those that participated).

Fascinatingly, the formal gold standard system was short-lived.  The largest dropper was the U.S. at the time, abandoning the gold standard in 1971.

Completely unsurprisingly, when the U.S. went off the gold standard, significant hyperinflation followed in the late 1970s and early 1980s.

Fast forward to this decade, and perhaps the most significant comment from a world leader was from former World Bank president Robert Zoellick, who publicly stated that he thought all countries should return to the gold standard.
In 2011, gold reached its all-time high of $2,000 per troy ounce. 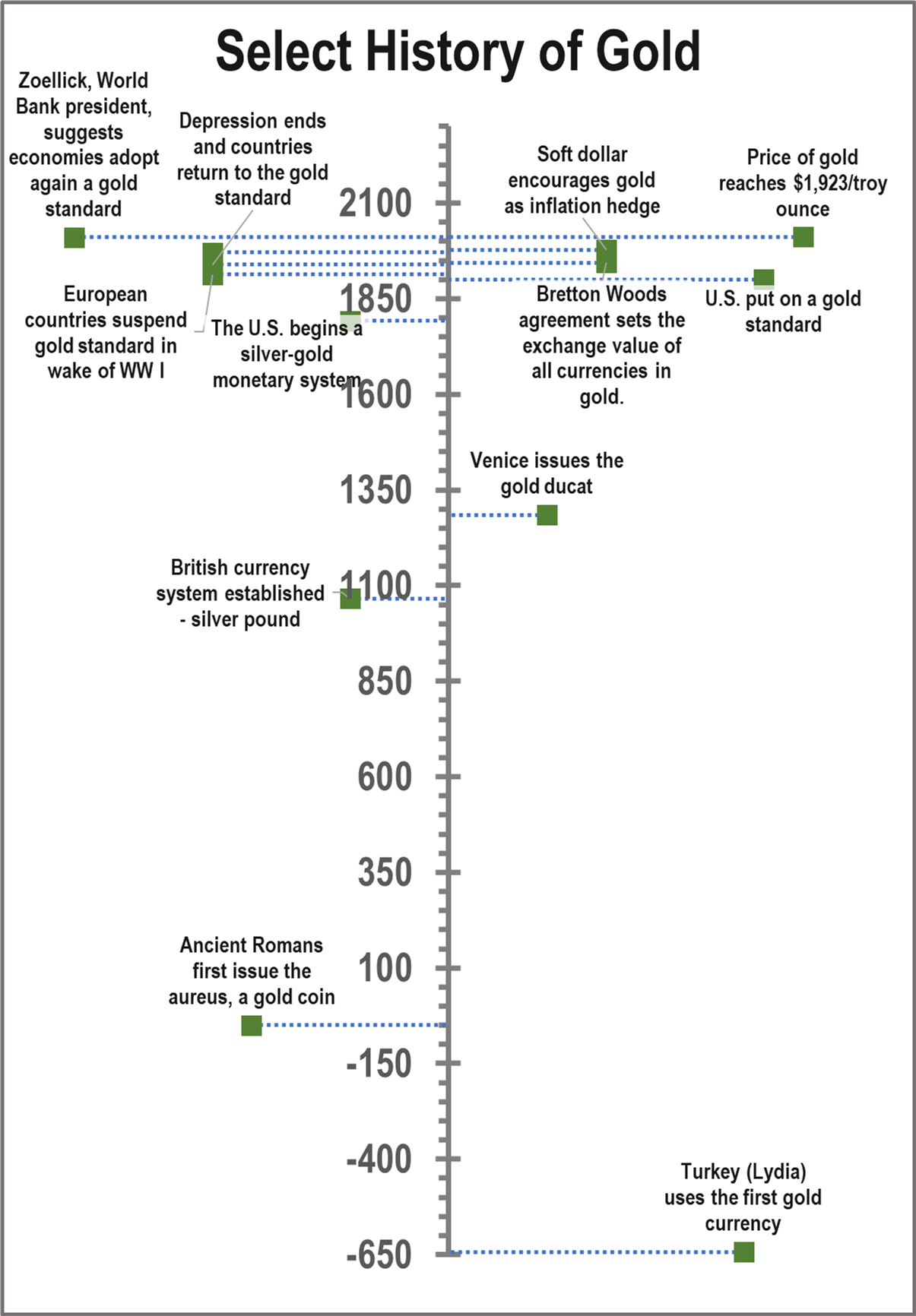 When is the next gold event?
This background of events should make one wonder when the next big “gold event” will be?  Although unknown, it is worth speculating.  One possible trigger could be the massive money printing and loose interest rates central banks around the globe are adopting.  Eventually, a consequence will come from such manipulation, but interestingly it has not come home to roost yet – but when it does, gold will undoubtedly be a big winner.

Conclusion
Gold is the longest running store of value the world has ever known, having held this title for more than 2,500 years.  In looking at what has happened with gold throughout history, one has to be wondering when the next big event will be and what will be the trigger.  Possibly, central bankers, the supposed saviors of the financial world, may end up being the triggers for a gold heyday in coming years.